Time for the Next Great Awakening …

Throughout the late 1800’s there was political nightmare happening in America. This nightmare eventually erupted into a Civil War. However, what is also interesting it also ushered in some of the Greatest Revivals in history. As I sit today reading the news, listening to people talk, and realize we are once again in the midst of a political nightmare. I listen to the President talk and yes even tweet (personally I wish all their tweet accounts were shut down), I hear presidential candidates, Senators, Congressmen and Congresswomen, political advisors, and sadly, Pastors commenting back and forth.

Realize, just as with the events of the mid-1800’s the only true survival for America is a great move of God, Yes a real National Revival, from the White House to the Farm House, from the Department of Education to the classroom, from the Pentagon to the local military base. Yes, even from the National Cathedral to the local church. It is time once again for America to seek a real solution, it is time for Men and Women of prayer to stand up and pray for revival. It is time for so called Men and Women of God to go into their prayer closets and seek God and shut up in public.

It is time for Men and Women of God to step into their calling and preach repentance to a nation as John the Baptist did, it is time for these men and women to preach the truth of scripture and not a personal interpretation of the scripture. When we look at the Great Revivals of History there is one consistent theme "Scripture is the Word of God, and Confession of Sin and Repentance"

We want to see the political battles stop, racism stopped, the violence in the streets stopped, the abortion of unwanted children stopped, we must stop tweeting our opinion, and do it God’s way "First Chronicles 7: 14 .. the King James Version puts it this way "If my people which are called by my name, shall humble themselves, and pray, and seek my face, and turn from their wicked ways; then I will hear from heaven, and will forgive their sin, and will heal their land"

What I find interesting in this passage is that he is talking to the believer, the Baptist, Methodist, and Assembly of the God, Church of Christ, and Charismatic non-denominational and yes even the Catholics. It is time for the CHURCH to seek HIM (Christ) and let him do the healing. It is time to simply pray, seek, and repent.

I’m convinced that the Greatest Revival is yet to come, the only question is how bad will we allow it to get before we seek it?


We are excited to announce a New Certificate Program this fall at GCOTV School of Ministry. If your in the Greater Cincinnati please join us and earn your “Certificate in Leadership Excellence” 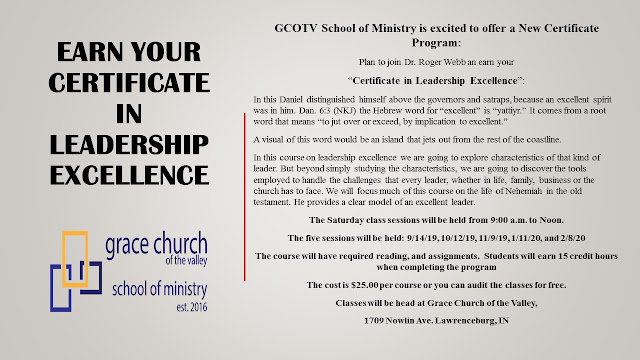 Hard to believe it is the 4th of July!

I was sitting here reflecting on tomorrow and the meaning of the4th of July.  As I share with my family and friends it appears to mean so many different things.
To me it is a celebration of the history of the United States of America, the good, the bad, and yes even the ugly. As a nation we have endured 243 years of successes and failures. We have seen the peaceful transition of government (both the presidency and congress), and some would agree that others were totally out of control.
Historically, 13 colonies sent men with different religions, political beliefs, and yes even different views of human rights. Yet they were able to come together and form a political system that has allowed for a Nation that has accomplished so much not only here within our borders, but around the world.
We have freedoms that other countries only wish they could have because of those events 243 years ago. I personally thank God daily that I have the privilege to live in the United States, a country that has sent more missionaries around the world than any other nation in history. A country that has given more in humanitarian aid around the world than will ever be known, a country that fought for the freedom of other nations as well as our own.
The 4th of July is not only about celebrating this country’s history, it is about celebrating how God has blessed this country. As you reflect on this day, do me a favor!
Read your Bible, Read the Constitution, Study History and pray that God continues to bless the United States of America!

Yesterday,  January 6, 2021 will ultimately go down as one of the saddest days in American History! The reason will vary dependin...

Dr. Don Allen, Jr
Rev. Don Allen, Jr PhD. President of Grace Church of the Valley School of Ministry, Chaplain of Summit Behavioral Healthcare, as well active with other colleges locally and around the world.